Send Us Pictures of Your Furry Friend...

Who Knows they or yo u may receive something in the mail ..
We are looking for cats, dogs, and other pets you love.

Send to Ms. Stinky at;

Ms.Stinky
Posted by Ms. Stinky at 7:21 PM No comments:

If you are thinking of declawing a cat, or a veterinarian suggest declawing at the same time as neutering, before you make a decision for non-reversible surgery. Please consider these reasons Not to declaw. Your cat will live his or her remaining years with the results of your decision, one way or another.
Trust me I know about this - Ms. Stinky..
Declawing Is Not Just Nail Trimming
Nor is declawing only the removal of a portion of a claw. Instead it is the surgical amputation of
the cat's toes. Whether this procedure is accomplished with a scalpel, a guillotine type cutter or laser, it is not to be undertaken lightly.
Declawing Does Nothing to Benefit The Cat
You will sometimes hear the disclaimer. "It is better than putting them to sleep." This is a
fallacious argument, and usually offered only to soothe the owner's conscience. Only the cat's owner can make the decision to kill her cat because of scratching problems. He or she can also
make the decision to let him or her keep their toes. Unlike neutering, which does benefit the cat, both health wise and behavioral wise, declawing simply does nothing positive for the cat.
Declawing Robs a Cat Of Their Weapon Of Defense
A typical counter-argument is "My cat is indoors-only", Even indoor cats sometimes manage to escape. A declawed cat does not stand a chance against a large dog, a bigger cat or a predator.
Although he or she still has teeth, by the time they get in close enough to bite, it may be too late.
Declawing Is Painful Surgery
Think of it as 10 amputations (If only the front feet are declawed). Pain meds may help initially, but phantom pain may last for weeks or months, as nerve endings heal. Unlike routine
recovers, including recovery from neutering surgeries, which are fairly peaceful, declawing surgery results in cat bouncing off the walls of the recovery cage because of escrucaiating pain.
Declawing May lead To Litter Box Problems
Declawed cats often associate the pain when digging in litter with the litter box itself, and will
avoid it, shooing softer carpeting instead.
Declawing Sometimes Leads To Bitting Problems
When cats lose their ability to give a quick warning scratch, they will often resort to their second
line of defense; a food, hard bite. The cat's owner may sometimes find themselves the victim, just when he/she thinks their cat is enjoying a petting session.
Cats Need The Exercise Their Claws And Toes Provide
Watch cat stretch, whether horizontally or on a carpet or vertically with a tail scratching post. They will grap the carpet or sisal with their claws, using the resistance to pull and stretch their muscles. Cat's claws actually play a large and positive role in their amazing muscle tone and agility.
Altered Gait May Lead To Later Joint Problem
Domestic cats are digitigrade meaning they walk on their toes. Walking with an altered gait because of the lack of the first digit of the toes can affect all the joints of the leg resulting later in arthritis of the hip and joints.
Cats Need To Be Cats For Their Entire "Nine Lives"
Honestly If a cat could speak human tongue, do you really think, given a choice they say. "Sure
thing, cut off part of my toes???? Their claws and toes are an integral part of making a cat a cat ..
Would you honestly want them to be anything less .. Especially since they are Humane Alternatives?? It is your decision, but please take your cat's needs into serious consideration before making such a drastic and permanent choice .. As A Feline Would you ant this to happen to You.. Think About It.. Ms. Stinky....
Posted by Ms. Stinky at 6:40 PM No comments:

How To Tell If Your Female Cat Is In Heat... 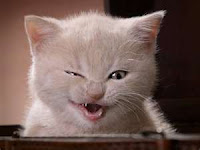 Female cats that are not spayed will eventually come into heat (technically called Oestrus), and the signs are unambiguous, once you know what to look for.
Here are some behavioral symptoms to watch for if you suspect your diva is in heat.
Difficulty: Easy
Time Required: Varies
Here's How:
1. Immediately preceding oestrus, your female cat may become
unusually affectionate by sidling up to stuffed toys, other cats
and /or her favorite human.
2. She may spend excessive time licking her genital area.
Note: Lacking the other behavioral traits or urinary tract
disorder, which can be serious if not treated promptly.
3. The Queen (name for female cats of breeding age) will vocalize loudly.
4. She will assume a mating position: Head down, forelegs bent,
rear quarters raise to expose the position with the tail raise and held
to the side of the body. Her rear legs will tread rhythmically.
5. Queenie may also spray vertical surfaces with a strongly
scented fluid. She will accomplish this by backing up to the
surface and raising her tail high. The tail may quiver, and she may perform the rhythmic treading described in step four.
6. If your female cat does not mate, she will go into oestrus as
often as every two to three weeks, for several months each year,
until she either mates or is spayed.
Tips:
1. Unless she is a qualified pedigreed breeder, your female cat should
be sprayed. It will not only cease the uncomfortable heat
cycles, but prevent certain serious medical problems.
2. Your veterinarian may be able to give your female cat hormones
to stop the oestrus, if spaying is not immediately possible.
2. Female cats as young as four months can go into oestrus.
Posted by Ms. Stinky at 5:53 PM No comments:

How to Clean Your Cat's Teeth... 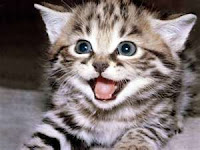 Ms. Stinky knows that dental health is every bit as important as it is to humans.

A regular program of teeth cleaning will ensure your cat will enjoy their senior years with all of their teeth intact.

Let Ms. Stinky Tell you How:

2. Wrap a strip of gauze around the index finger of your dominant hand and either dip it in the sterile solution, or apply a small amount of toothpaste to your fingertip.

4. Gently rub your "finger brush" in a circular motion on their teeth,
concentrating on the area next to the gums.

Gently massage the gums at the same time. It is not necessary to do the
back sides of the teeth.

5. Once your cat will tolerate this procedure, you can graduate to a small
child's toothbrush.

6. Give kitty a few loving pats and kind words, along with a little treat to
polish off with having shiny clean teeth.

1. You might want to experiment with flavored toothpaste for cats.
There is a fish-flavored one that is quite tasty.

2. If you start practicing examining your cats teeth at a very young age,
this process will be much easier.

3. Bleeding of the gums is a sign your cat needs professional dental
scaling by your veterinarian, so attend to that as soon as possible.

Promote Your Page Too